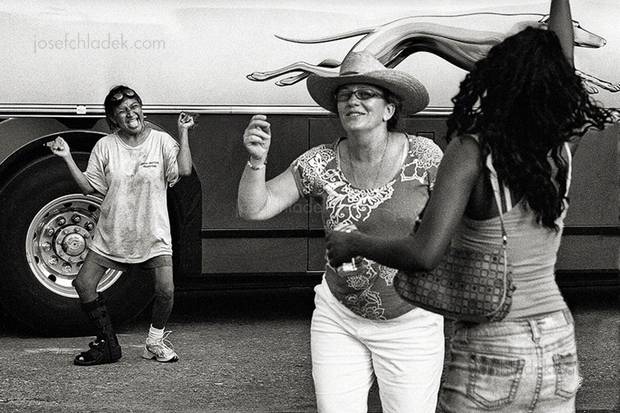 >> Support the campaign on kickstarter.com

Fair Witness is a collection of 70 classical street photographs taken between 2004 and 2011 in various locations throughout the United States and central Europe. The majority of the photographs, however, were taken in just a three-year period beginning in 2008.

Fair Witness has been the focus of my photographic life now for more than three years. This Kickstarter campaign has been almost a year in the making and, if it is successful, the Italian publisher Damiani Editore will make the book part of their Spring 2015 catalog.

The idea for the book came to me in the form of a serious challenge from Eli Reed. Eli, a 30 year member of Magnum Photos and a professor of photojournalism at the University of Texas, happened to live in Austin while I also lived there. Unbeknownst to me, he had been following my PAW (Picture A Week) galleries on my web site for some time.

Once I accepted his challenge, Eli mentored me, assisted me in early edits, introduced me to the first publisher I spoke with, and has generally encouraged me. I am happy to say that he and I are now good friends.

Eli and I will be teaming up for a street photography workshop as one of the rewards for this campaign.

FAIR WITNESS momentum has been slowly building and, with a go-or-no-go July deadline from Damiani, so that the book can be ready in time for their Spring 2015 catalog, the time for this campaign has arrived.

"I am a Fair Witness, not a participant." -- from Stranger in a Strange Land

"Any photographer who says he’s not a voyeur is either stupid or a liar." -- Helmut Newton, Photographer

"There’s a kind of beautiful loneliness in voyeurism. And that’s why I’m a photographer." -- Alec Soth, Photographer, Magnum Photos

I wander big city streets among people who have relaxed into the chaos, and they were mostly unaware of my presence. I look specifically for humor, irony, pathos, unusual juxtapositions, curious faces, and real or imagined stories. Each of the photographs in FAIR WITNESS occurred in my path, unplanned, and would have evaporated within seconds, if I had not been ready with my camera.

In this way, the photographs in my book capture fleeting, almost invisible, moments of the 21st century. In art history, an artist of the Symbolism Movement sought to make the invisible visible. Essentially, I am a Symbolist who carries a camera.

There are very few artists who create genres. Picasso and El Greco did. The vast majority of artists, even those with a unique vision, work within an existing genre which, for photographers and artists alike, is their chosen visual language. The genre through which I see is traditional, classic street photography.

>> Support the campaign on kickstarter.com

Navigate by click or with arrow keys, swipe on smartphone